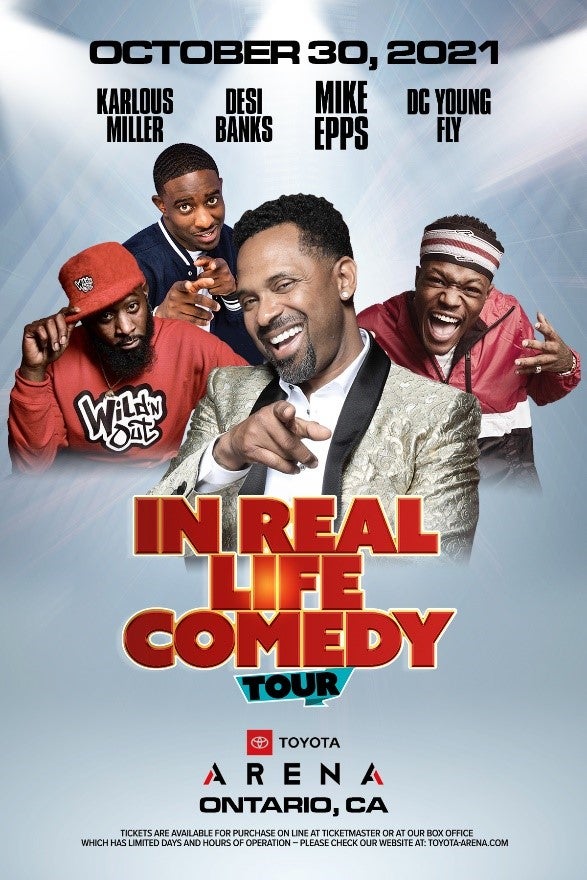 ONTARIO, Calif. (June 21, 2021) – Actor and comedian, Mike Epps, is set to bring the laughs to Ontario once again with the IN REAL LIFE COMEDY TOUR. Performing at the Toyota Arena on October 30 at 8 p.m., Epps will be joined on stage with some of comedy’s most talented and sought-after entertainers, including DC Young Fly, Karlous Miller and Desi Banks. Tickets go on sale to the general public June 25 at 10 a.m. at the Toyota Arena Box Office and Ticketmaster.com. The all-star lineup will be sure to bring down the house with non-stop laughter for an unforgettable night of comedy!

Epps is generating an extraordinary amount of buzz among his peers for being not only one of the funniest comic actors in town, but also for his burgeoning dramatic talent. He is currently starring in the Netflix comedy series “The Upshaws” with Wanda Sykes. Recent film appearances includes the Amazon feature “Troup Zero” with Viola Davis, Allison Janney, and Jim Gaffigan, in addition to the Netflix comedy “Dolemite Is My Name” with Eddie Murphy. Last summer, Epps released his latest standup special “Mike Epps: Only One Mike” (Netflix), and dropped the single “We Goin’ Out” feat. Big Boi and Sleepy Brown. Up next, Epps will be appearing in “The House Next Door,” sequel to the 2016 film “Meet The Blacks” and “Last Friday.”

The In Real Life Comedy Tour is presented by North American Entertainment Group Inc., one of the leading independent promoters of entertainment tours and live events in the United States.

Mike Epps is generating an extraordinary amount of buzz among his peers for being not only one of the funniest comic actors in town, but also for his burgeoning dramatic talent. In spring 2018 Harper Collins published Epps’s autobiography called Unsuccessful Thug, written by Mike about his life and childhood; growing up in poverty and how comedy saved his life. He recently starred in the Amazon feature “Troup Zero” alongside Viola Davis, Allison Janney, and Jim Gaffigan, in addition to the Netflix comedy “Dolemite Is My Name” with Eddie Murphy. Mike can next be seen in the upcoming comedies “The Trap” and “The House Next Door.” Since 2000, Epps steadily climbed his way up the stand-up comedy ranks when he was recognized by a national audience in 1995 for appearing on HBO’s Def Comedy Jam (which, years later, he would go on to host). Feature films includes “Next Friday,” "Friday after Next," “All About the Benjamins,” “The Hangover,” “Girls Trip,” “Faster,” “Hancock,” “Lottery Ticket,” “Next Day Air,” “Roll Bounce,” “The Fighting Temptations”, the Resident Evil franchise, “Bait”, “How High,” “Dr. Dolittle 2,” "Talk to Me," “Bessie,”  "Repentance," “Nina,” "Guess Who?" and “Jumping the Broom."

Originally having picked up traction for his hilarious videos on Vine, DC Young Fly is a hands down fan-favorite amongst today’s generation. He is a veteran cast member of Nick Cannon’s “Wild ’N Out” (BET), which is entering production for its 13th season, and has brought the humor to MTV’s TRL (Total Request Live reboot) as one of its main hosts. Film credits include “How High 2,” “The New Edition Story” and “Almost Christmas.”

Karlous Miller is a comedian/actor most known for being a veteran cast member on MTV's “Wild ’N Out” with Nick Cannon. Appearances also include “Last Comic Standing” (NBC), “Joking Off (MTV), “Comic View” (BET), to name a few. Every week, Karlous hosts the hit “85 South Show” podcast with DC Young Fly, which has gained a fanbase across the globe.

Desi Banks is an actor, comedian, and cultural influencer based out of Atlanta, GA. With over 6 million followers on Instagram, he is known for his hilariously relatable digital sketches featuring popular characters Parlay, Lil Johnny and Grandma Reese. These unique sketches have featured many other notable online personalities to include B. Simone, Pretty Vee and Candace B. With instant success in standup, he has consistently landed on The Hollywood Reporter’s Top 10 Most Popular Comedians list. Through his production company, Desi Banks Productions, he writes, produces and stars as the leading actor in the new web series, “How It Goes Down in The Hood.” In addition, Desi can be seen on the big screen alongside Regina Hall, Marsai Martin, and Issa Rae in Will Packer’s film “Little” as well as in the romantic comedy “Love By Chance” alongside Terri J. Vaughn and Clifton Powell.