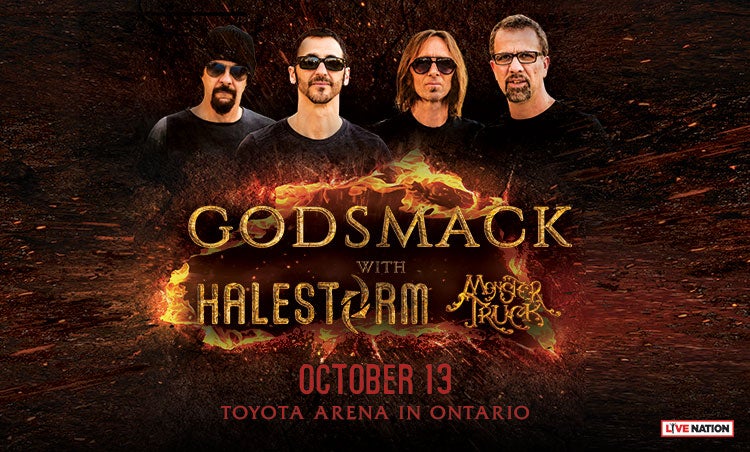 GODSMACK will extend their in-progress world tour with additional dates taking the band into the fall.  The new shows, with Halestorm supporting, kick off September 20 in Green Bay, WI and wrap October 18 in Tulsa, OK.  Tickets for the fall shows go on sale Friday, June 28 at 10:00 AM (local time).

The band--Sully Erna [vocals, guitar], Tony Rombola [guitar], Robbie Merrill [bass], and Shannon Larkin [drums]—just wrapped their European and U.K. dates.  They’ve spent more than a year on the road, both in North America and throughout Europe in support of their WHEN LEGENDS RISE album.

“Between the tight sound, high energy and entertaining stage show, it’s no secret why Godsmack have been one of the most dominating and prominent bands throughout the last two decades. They are so much fun to watch and experience and give plenty of credit to the fans for holding them up for so long.”

“From incredible lighting to plumes of pyro; Godsmack definitely knows how to accentuate their set to keep the crowd glued to the stage.”

“With pyro and flame bursts lighting the stage behind them throughout the set’s opening number ‘When Legends Rise’—vocalist Sully Erna’s snarky, brash New England attitude was on full display. ‘1000hp’ and ‘Keep Away’ followed closely behind and helped fuel the crowd with aggressive energy. The band’s iconic lead singer, Erna took time in between songs to discuss his new hair gel and share his appreciation for the crowd. Mid set hits included ‘Awake’ and the haunting ‘Voodoo’ led perfectly into the now show standard drum solo by Shannon Larkin and then a straight-up percussion duel with Erna, who jumped behind a second drum set.”

“[Godsmack] were f’ing fantastic live!…Godsmack has a way with a crowd that truly is a connection made through their music, as evident in the giant sing-a-long that 70,000 fans were participating in with as the band played.”

“Launching their career at Woodstock 99, Godsmack is the king of festival show and tonight was the crown. Filled with pyro, extreme lighting, sonic booms, and their entire catalogue of hits, this was an adrenaline rush entering your veins from start to finish.”

“Under Your Scars” is the latest single from the band’s current album, WHEN LEGENDS RISE. The song is now #5 on the Active Rock Chart, coming on the heels of the album’s two previous #1 active rock hits: “When Legends Rise” and “Bulletproof,” the latter of which was recently certified Gold in the US for over 500,000 digital single equivalents and was also the most-played song at rock radio in 2018.

To coincide with the release of “Under Your Scars,” SULLY ERNA announced the creation of The Scars Foundation to support ongoing mental health struggles facing so many.  For more information, please click here.

WHEN LEGENDS RISE marks the band’s seventh studio album and their first in four years. The critically acclaimed 11-song collection entered the Billboard Top 200 album chart in the top ten (#8), with four #1 placements on other charts: Top Rock Albums, Top Hard Music Albums, Top Independent Albums and Top Alternative Albums. WHEN LEGENDS RISE is available on CD, LP and Digital; purchase or stream it here. The album finds the guys doubling down on their combination of tightly wound riffs, rhythmic fury, naked emotions and pushed-to-the-edge vocals, all fired up with melodic precision and tight songcraft.

Godsmack stand strong as 21st century hard rock titans. With an unbreakable spirit and diehard work ethic evocative of their hometown, the Boston quartet fought hard to secure a place in music history since first smashing their way on to the scene in 1998. To date, they’ve notched a staggering ten #1 singles at mainstream rock radio, including “Awake,” “Straight Out of Line,” “Cryin’ Like A Bitch,” and “I Stand Alone.” Moreover, they’ve enjoyed 24 Top 10 hits at the format-the most of any act since February 1999–as well as four Grammy nominations, and were winners of The Billboard Music Awards Rock Artists of the Year in 2001. Selling over 20 million records worldwide, the band has also unleashed three consecutive albums at #1 on the Billboard Top 200-namely Faceless [2003], IV [2006], and The Oracle [2010]. This places them in league with Van Halen, U2, Metallica, Dave Matthews Band, and Linkin Park who have also enjoyed the same streak. Moreover, the accomplishment on the road remains staggering with headlining sets around the world.  They still stand alone.