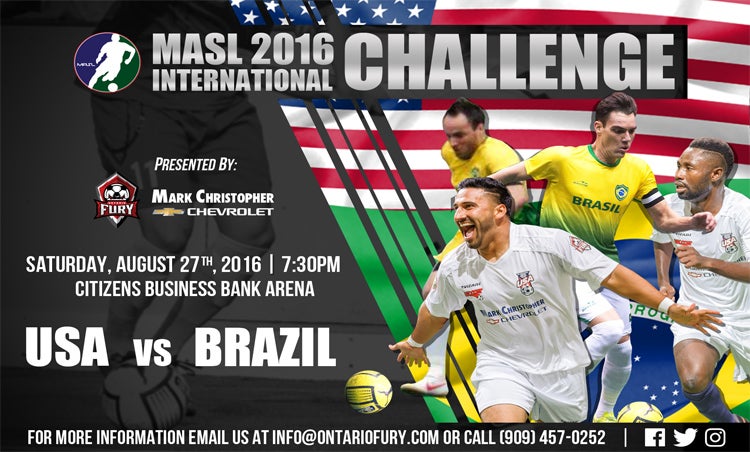 The first ever MASL International Challenge at Citizens Business Bank Arena between the United States and Mexico drew more than 7,000 fans to the arena on June 27, 2016, the largest arena soccer crowd in the arena’s history. The upcoming exhibition will give the MASL’s top Brazilian players a chance to show off their skills against the U.S. team that won the first-ever Arena Soccer World Cup last year.

“The overwhelming response of the fans and the atmosphere we had for the first game was amazing, and we wanted to give our fans another opportunity to see the top players in action,” said Fury president Bernie Lilavois. “Many of the top players in our league are from Brazil, and we want to showcase their talents for the great fans in the Inland Empire.”

Rosters for the game will be announced in the coming days, with players representing teams from across the MASL expected to play. The Brazilian team advanced to the semifinals of the Arena Soccer World Cup before being eliminated by Mexico.

Tickets for the game, starting at $10, will go on sale Monday August 8th at 10 a.m. at the Citizens Business Bank Arena Box Office or online at Ticketmaster.com. Special group ticket packages are available through the Fury’s office by calling 909-457-0252.

Season tickets for the Ontario Fury’s 2016-17 season are also on sale now through the Fury’s office. Season ticket members get free parking for the season, invitations to exclusive season ticket holder events, discounts on merchandise and can participate in the Ticket Exchange Program, to make sure their tickets don’t go to waste.

For more information about the Fury, visit the team’s website at OntarioFury.com, call the Fury’s office at 909-457-0252 or email [email protected]