Tickets On Sale Now at Ticketmaster.com 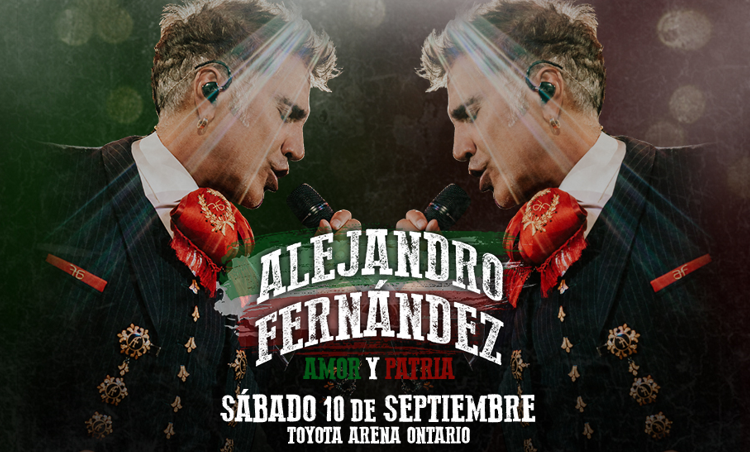 Tickets to the general public on sale now at ticketmaster.com

The performances—a celebration of love and patriotism--will mark his return to the U.S. following the passing of his legendary father Vicente Fernández late last year.

“I am very excited to come back to the US to perform and celebrate AMOR y PATRIA with all of my fans. I will see you all very soon…. VIVA MEXICO! , said Alejandro Fernández.

MORE:
Alejandro Fernández’s most recent SOLD OUT US TOUR “Hecho en México” wrapped in October 2021. Alejandro’s most successful US tour ever, came on the heels of his hugely successful album of the same name which garnered him 4 number-one singles on US Latin radio charts. Alejandro became the first Latino artist to achieve number one albums in 4 consecutive decades—1990’s, 2000’s, 2010’s and 2020.

Alejandro’s Hecho en México tour raised over $100,000 USD to assist immigrant families separated at the US/Mexico Border.  For the Amor Y Patria shows, Fernández will continue to support the US Hispanic community by donating part of his proceeds to Dream Big Nevada and Dreamers Resource Center, a scholarship program at Rio Hondo College that assists the undocumented student population in their pursuit of higher education.

About TOYOTA ARENA
Toyota Arena, located in Southern California, built and owned by the City of Ontario, managed by SMG Worldwide, continues to win awards for the best entertainment venue in the region. The 225,000 square foot venue can accommodate capacities up to 11,000 for concerts, family shows, and sporting competitions. The arena features 36 luxury suites located on two levels and a continuous concourse hosting a variety of refreshment stands, merchandise kiosks, a VIP club and other fan amenities. Toyota Arena is proud to be recognized for cleaning and disinfecting to a higher standard to keep our space clean and safe for occupancy with a GBAC Star Accreditation.  Toyota Arena hosts a variety of sporting competitions, concerts, family shows, special events, graduation ceremonies and community activities as well as private events.  The Arena is home to Ontario Reign, an AHL Hockey Team, and Ontario Fury, a MASL Soccer Team and the Aqua Caliente Clippers of Ontario, a G league basketball team. Toyota Arena is the biggest and most modern arena within the region, an area with over 4.7 million people. It is located in the City of Ontario, California, on a 37-acre parcel located between Haven Avenue and Milliken Avenue, Fourth Street and the I-10 Freeway.  For more information visit Toyota-Arena.com

To apply for media credentials for show coverage:
livenation.com/pressrequests