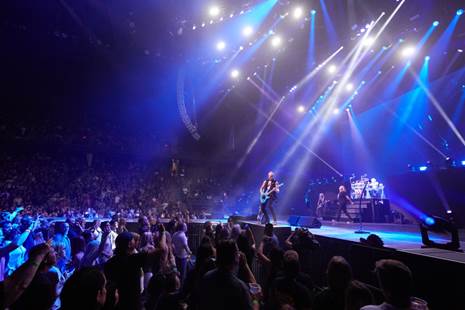 SMG has also worked tirelessly to bring a diverse mix of events to the City of Ontario.  Recent sell-outs by Def Leppard and Tim McGraw/Faith Hill have proven the market will support big name events.  In May, SMG and the Los Angeles Clippers announced that the Clippers new development league team, the Agua Caliente Clippers of Ontario will be moving to Ontario.  This team will add to the entertainment options at Citizens Business Bank Arena and to the already busy arena calendar. “We are proud to team-up with the Agua Caliente Band of Cahuilla Indians to bring highly competitive professional basketball to the Inland Empire,” said Clippers President of Business Operations Gillian Zucker. “This region has already demonstrated enormous passion for the Clippers. Locating our team in Ontario allows us to reward that enthusiasm and continue to build a deep connection with these fans by offering affordable, family fun right in their backyard.”

SMG has also improved the food and beverages options to the delight of guests.  The all new street tacos have been a fan favorite, along with the carne asada nachos and the slow roasted brisket sandwich with homemade BBQ sauce.  New partnerships have been developed including  Hanger 24 Craft Brewery, Jimmie John’s, and Chick Fil A. Prior to two sold out concerts, Def Leppard and Tim McGraw/Faith Hill, an early outdoor party experience offered dining options, concert merchandise, games and vendors.  Part of the overall improvement of the guest experience has been providing excellent food and beverage options.  Since taking over management, Premier Foods by SMG has increased sales by 14%.  Not only the fans have recognized the quality, the entertainers have expressed their appreciation for the quality, taste, and presentation of food at Citizens Business Bank Arena.

Other initiatives implemented by SMG during this first year of management include the following:

SMG currently manages Ontario Convention Center, Ontario Town Square, Citizens Business Bank Arena, the Greater Ontario Convention & Visitors Bureau including the California Welcome Center at Ontario Mills and produces signature events such as Route 66 Cruisin' Reunion.  The overall synergy created by utilizing all the marketing resources to co-promote events is making a difference.  There are over 6,000 hotel rooms in the Greater Ontario region.  The management of those hotels are provided with a monthly calendar of arena and convention center events.  Currently six electronic marquees are advertising upcoming events at the Arena on a regular basis.  With the new, larger LED marquee sign build that will be in place by the fall of 2017, plus 5 other local marquees and an additional 10 electronic sign boards throughout the region coming this fall the promotional reach for upcoming shows will reach over 2.2 million people daily.

Overall, Citizens Business Bank Arena is being upgraded to a better venue that provides the local, regional, and Southern California fans with the best entertainment experience possible.

Since opening in 2008, Citizens Business Bank Arena is the biggest and most modern arena within the Inland Empire, an area with over 4.3 million people. It is located in Southern California, in the City of Ontario, on a 37-acre parcel located between Haven Avenue and Milliken Avenue, Fourth Street and the Interstate 10. For more information and future updates please visit: CBBankArena.com