Thursday, July 19, 2018 (Ontario, California) Citizens Business Bank Arena is one of the World’s Top 200 Arena Venues per the annual Pollstar Mid Year Rankings Report recently announced which is based upon concert ticket sales from January 1 – June 30, 2018. Citizens Business Bank Arena, managed by SMG Worldwide, has the highest rankings ever with #17 domestically and #37 worldwide. “We’re on fire with booking shows and events” said Michael Krouse, President and CEO of Citizens Business Bank Arena. “Our guests and sponsors are thrilled to have top notch entertainment – this was a goal we had when we took over management of the venue on July 1, 2016. All the hard work is paying off; but we’re not done, we’re making improvements to the overall entertainment experience in addition to staying focused on booking amazing acts! We want to thank all of the fans and promoters that have helped make this new record possible.” Citizens Business Bank Arena is the highest grossing arena in the SMG portfolio in the United States. 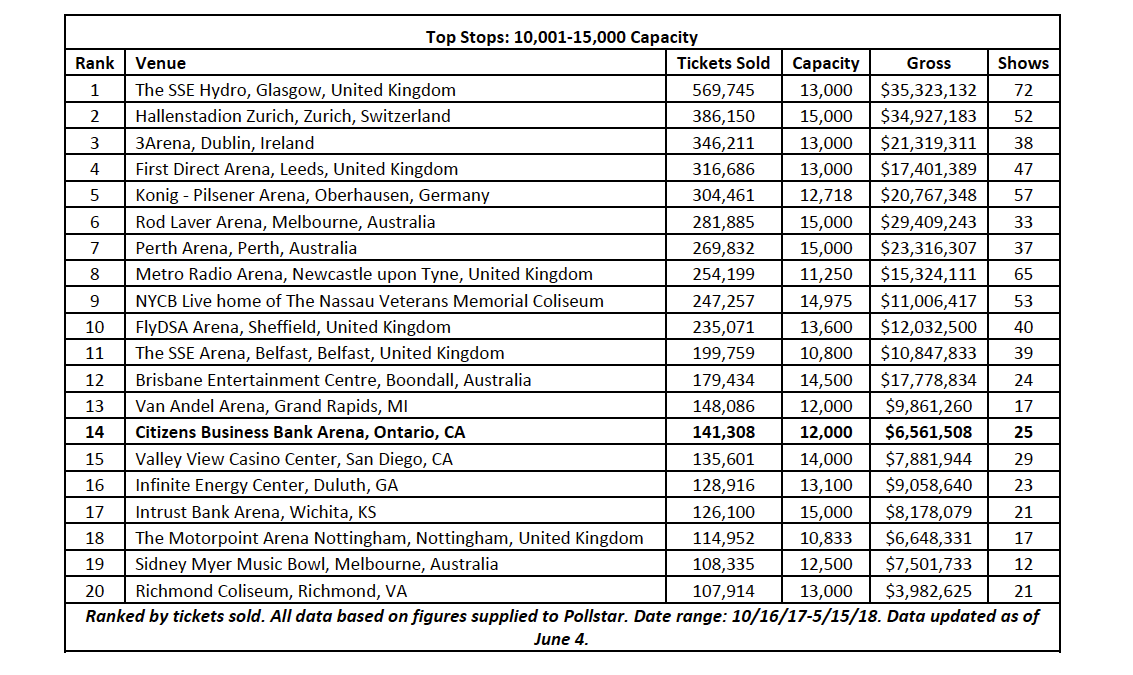 This is a major milestone. Two years ago, when SMG took over management of the Arena it ranked #193, last year it ranked at #95, and now #14 in this category. Pollstar is the leading international publication for the concert industry, which publishes quarterly, mid-year and annual rankings of top arenas in ticket sales worldwide.

This Fall the Arena calendar is full of entertainment options for everyone. Just announced- Rod Stewart with special guests Pat Benetar & Neil Geraldo. Additional concerts in the Fall include Five Finger Death Punch, Mike Epps, and more to be announced soon. Three home teams will start their new season, plus other sporting competitions including Professional Bull Riding, and MMA King of the Cage.  Family shows like Cirque Musica, WWE, Disney on Ice and Trans-Siberian Orchestra round out a very exciting schedule of shows.

Since opening in 2008, Citizens Business Bank Arena is the biggest and most modern arena within the Inland Empire, an area with over 4.3 million people. It is located in Southern California, in the City of Ontario, on a 37-acre parcel located between Haven Avenue and Milliken Avenue, Fourth Street and the Interstate 10.
For more information visit CBBankArena.com