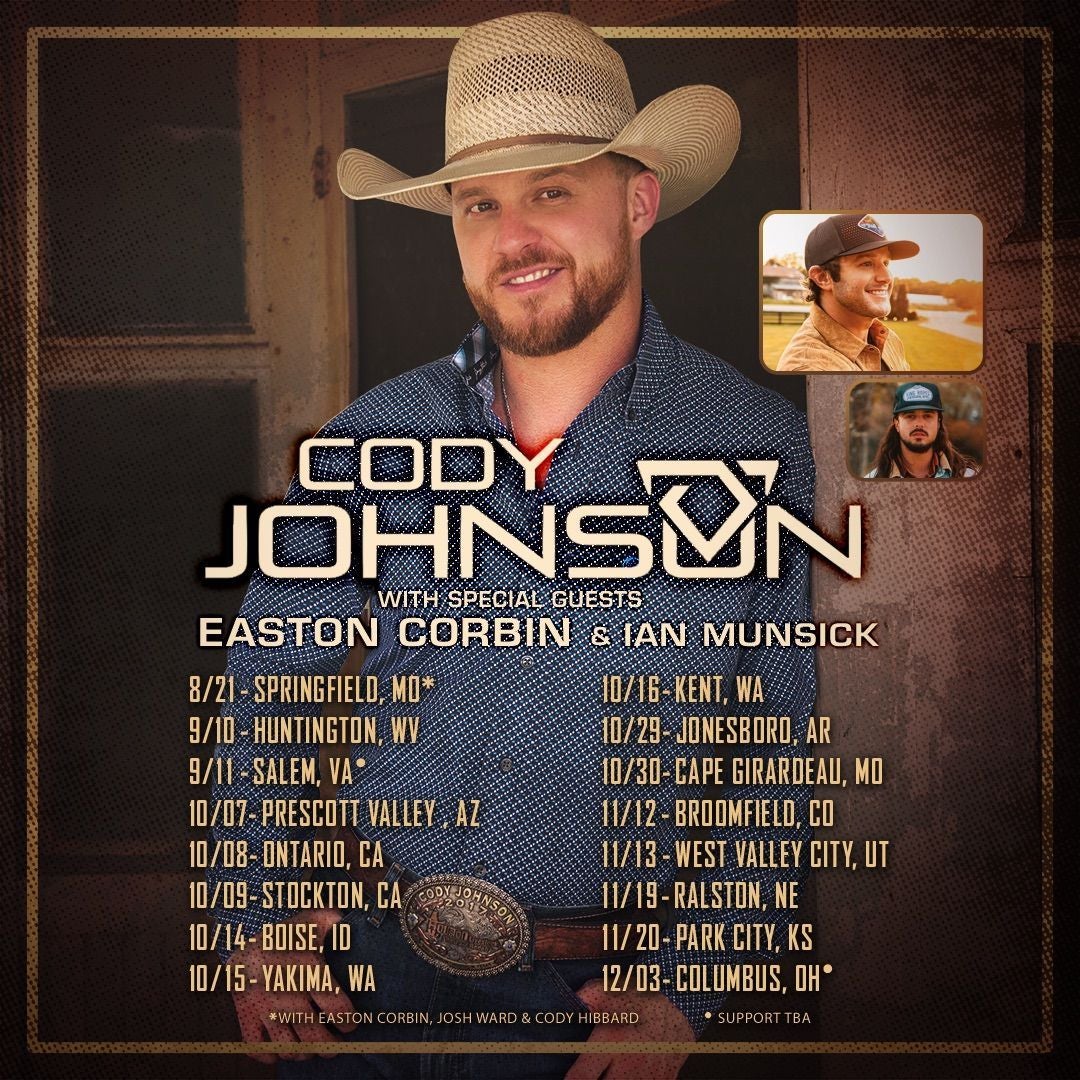 Nashville, TN— COJO Music/Warner Music Nashville country powerhouse Cody Johnson is roaring into the second half of 2021 with an impressive slate of North American tour dates and new music. The critically acclaimed country singer and songwriter will p lay more than 40 shows in the United States beginning in June.

“There are few feelings more amazing than being on stage with my friends in front of all our fans,” Johnson says. “I can’t te ll you how excited the whole gang is to finally be back on the road playing country music for you.”

Johnson also recently released the new song “Sad Songs and Waltzes,” a retelling of Willie Nelson’s 1973 classic featuring the global icon himself. Fresh off his 2019 No. 1 album, AIN'T NOTHIN' TO IT, Johnson released the song with more exciting news — a new, 18- track double album will be coming in the Fall.

Johnson has amassed more than 2.1 billion streams of his music, racking up two New Male Artist of the Year nominations at the Academy of Country Music Awards and a New Artist of the Year nomination at the Country Music Association Awards. In addition to Johnson’s new duet with Willie Nelson, the singer recently collaborated with Reba McEntire on “Dear Rodeo,” a song that inspi red the new autobiographical documentary film Dear Rodeo: The Cody Johnson Story.

Johnson’s new tour kicks off on June 17 at The Country Fest in Lawrence, OH. For a complete list of tour dates, visit www.codyjohnsonmusic.com.

Easton Corbin’s distinctive baritone has been gracing airwaves for the past decade as his chart-topping debut single “A Little More Country Than That” established Corbin as a mainstay on the country charts. Billboard’s 2010 Top New Country Artist would go on to garner another No. 1 hit with the feel-good “Roll With It” as well as seven top 10 singles, further distinguishing himself from other male vocalists as a tried-and-true country traditionalist who weaves timeless story songs together while tipping his hat to the classic country artists who have come before him. Though 2020 marked the 10th anniversary of “A Little More Country Than That” achieving No. 1 status, Corbin showed no signs of slowing down. With the release of his infectious single “Turn Up,” he launched a year of new releases, including tune “Didn’t Miss A Beat,” which he performed on NBC’s TODAY Show. November brought Corbin’s highly anticipated EP of the same title, which included a “wide array” of songs like “Old Lovers Don’t Make Good Friends” and “Back to Me.”

Wyoming-born singer-songwriter Ian Munsick’s upbringing was a mix of working the ranch and working crowds. Incorporating elements across genres, he has now begun to establish himself as a progressive artist with an old soul. In 2017 he released a self-titled EP, winning iHeartRadio’s Rocky Mountain Song of the Year for the rootsy “Horses Are Faster” and becoming the only artist who simultaneously qualified two tracks as finalists in the NSAI/CMT songwriting competition. Munsick has since signing with Warner Music Nashville, earned more than 45 million global streams, and been named one of Spotify’s inaugural Hot Country Artists to Watch . His debut album COYOTE CRY is out now.