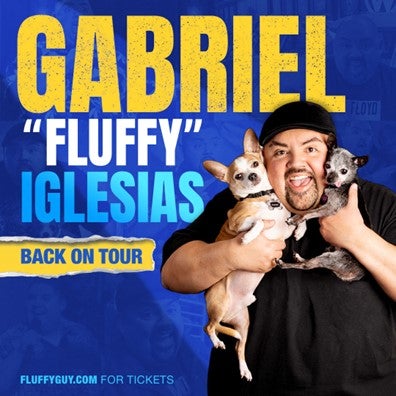 Ontario, CA (August 1, 2022) –​ Comedian Gabriel “Fluffy” Iglesias will be performing at Toyota Arena in Ontario, CA on Friday, September 23, 2022. This is part of his all new 2022 Gabriel “Fluffy” Iglesias Back On Tour. ​Venue pre-sale begins on Thursday, August 4th at 10am local time. Tickets to the general public go on sale Friday, August 5th at 10am local time at Fluffyguy.com and Ticketmaster.com.

Gabriel “Fluffy” Iglesias is one of the world's most successful and popular stand-up comedians, performing sold-out concerts around the world. He is also one of the most watched comedians on YouTube with over one billion views.

Iglesias made history this year (May 2022), becoming the first comedian to perform at and sell out Dodger Stadium in front of 55,000 fans, joining the likes of Elvis, Madonna, The Beatles, and Elton John. That show will air as Netflix's biggest special later this year.

His previous specials have sold millions of DVD copies around the globe.

Gabriel was included in The Hollywood Reporter’s “Top 40 Comedy Players” issue alongside comedy giants Jerry Seinfeld, Chris Rock, and Lorne Michaels. Iglesias also had the distinct honor of being one of the few to headline and sell-out Madison Square Garden in New York, Crypto.com Arena in Los Angeles, and Sydney Opera House in Australia. He embarked on a European arena comedy tour this past summer.

On TV, Gabriel is the star and executive producer of the original Netflix comedy series, Mr. Iglesias, which is currently streaming 3 seasons.

Feature film credits include co-starring roles in Magic Mike and Magic Mike XXL. His voice has been heard in the animated films Space Jam: A New Legacy as “Speedy Gonzales” and Pixar’s Academy Award nominated film Coco. Gabriel is one of a handful of comedians with a theatrically released stand-up concert comedy film, The Fluffy Movie.

Gabriel Iglesias is the youngest of six children, raised by a single mother in Long Beach, CA. It was during his childhood that he developed a strong sense of humor to deal with the obstacles he faced. In 1997, he set out to hone his comedic skills, and performed stand-up anywhere he could find an audience, including biker bars and hole-in-the-wall joints. Gabriel’s stand-up comedy is a mixture of storytelling, parodies, characters, and sound effects that bring his personal experiences to life. His unique and animated comedy style has made him popular among fans of all ages.

Toyota Arena, located in Southern California, built and owned by the City of Ontario, managed by SMG Worldwide, continues to win awards for the best entertainment venue in the region. The 225,000 square foot venue can accommodate capacities up to 11,000 for concerts, family shows, and sporting competitions. The arena features 36 luxury suites located on two levels and a continuous concourse hosting a variety of refreshment stands, merchandise kiosks, a VIP club and other fan amenities. Toyota Arena is proud to be recognized for cleaning and disinfecting to a higher standard to keep our space clean and safe for occupancy with a GBAC Star Accreditation.  Toyota Arena hosts a variety of sporting competitions, concerts, family shows, special events, graduation ceremonies and community activities as well as private events.  The Arena is home to Ontario Reign, an AHL Hockey Team, and Ontario Fury, a MASL Soccer Team and the Ontario Clippers, a G league basketball team. Toyota Arena is the biggest and most modern arena within the region, an area with over 4.7 million people. It is located in the City of Ontario, California, on a 37-acre parcel located between Haven Avenue and Milliken Avenue, Fourth Street and the I-10 Freeway.  For more information visit Toyota-Arena.com