Tickets On Sale to the General Public on Ticketmaster.com 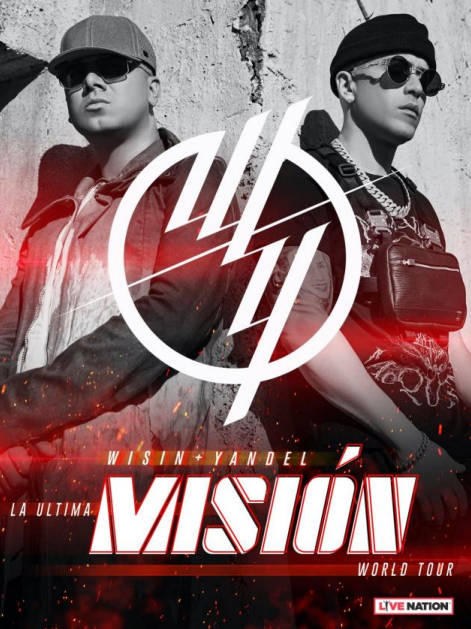 WHO: Wisin & Yandel
WHAT: LA ULTIMA MISIÓN
Latin music’s most iconic duo, Wisin & Yandel, have announced that they will embark on one final epic tour to celebrate the upcoming release of their newest album and 19 years as a duo, making these shows the last time fans can see them on stage together. Produced by Live Nation, the 26-city tour comes to Southern CA’s Toyota Arena on Friday, November 25, 2022.

Wisin & Yandel recently released the second single “No Se Olvida” from their upcoming album La Última Misión and were honored with the “President’s Award” from BMI on March 15, 2022.

TICKETS: Tickets on sale now on LiveNation.com and Ticketmaster.com.

About Wisin & Yandel
Wisin & Yandel are revered artists who have achieved continuous success in their solo careers, yet as a Latin music duo they have enjoyed unparalleled success. During their 19-year career as a duo, they have received numerous multi-platinum certifications in the United States and Latin America and several prestigious awards, including a GRAMMY® and two Latin GRAMMYs®, as well as ten Billboard Latin Airplay chart-toppers. On tour, Wisin & Yandel have proven to be a  force like no other in the urban music world.

About TOYOTA ARENA
Toyota Arena, located in Southern California, built and owned by the City of Ontario, managed by SMG Worldwide, continues to win awards for the best entertainment venue in the region. The 225,000 square foot venue can accommodate capacities up to 11,000 for concerts, family shows, and sporting competitions. The arena features 36 luxury suites located on two levels and a continuous concourse hosting a variety of refreshment stands, merchandise kiosks, a VIP club and other fan amenities. Toyota Arena is proud to be recognized for cleaning and disinfecting to a higher standard to keep our space clean and safe for occupancy with a GBAC Star Accreditation. Toyota Arena hosts a variety of sporting competitions, concerts, family shows, special events, graduation ceremonies and community activities as well as private events. The Arena is home to Ontario Reign, an AHL Hockey Team, and Ontario Fury, a MASL Soccer Team and the Aqua Caliente Clippers of Ontario, a G league basketball team. Toyota  Arena is the biggest and most modern arena within the region, an area with over 4.7 million people. It is located in the City of Ontario, California, on a 37-acre parcel located between Haven Avenue and Milliken Avenue, Fourth Street and the I-10 Freeway. For more information visit Toyota-Arena.com